Who We Are and What We Do

Egghead is a state of mind, really. We’re a network of creatives who all love to nerd out on what we do.

In a world where people are more aware and plugged in than ever, it’s not enough to have a great product. Consumers are looking for brands they can relate to, who make them feel human, who make them feel like there are real humans behind it. That’s where we come in.

Everything we do — whether it’s full-on identity development or creating social content — is powered by deepening the connection with your brand. We operate a little differently, though. We’re less about common physical spaces and more about common passions and ambitions.

Need a copywriter who also has a social strategy background? Meet Marisa. Need a bilingual video producer? She’s with us, too. We’ve got graphic designers in Toledo. Web Developers in Toronto. Photographers in Pittsburgh. And a lean, multi-craft network of highly specialized creatives.

So every time you do business with Egghead, you’re getting a bespoke team for your project designed around what you need. 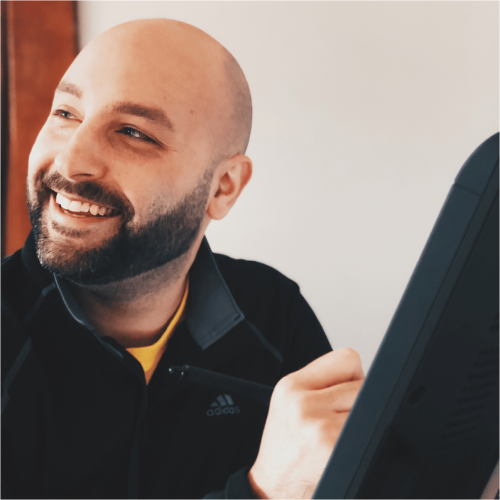 Donald’s love for design started at 9 years old, designing uniforms and shoes for NBA teams. In high school, that progressed to doodling logos for pro wrestlers, bands, athletic teams, and the like.

Cut to several years later, he pursued a degree in education and became a teacher. Admittedly, he still got to play with colors and shapes, but he realized he needed to change course.

In pursuit of his true passion, Donald went back to school to study design and started freelancing. That path quickly led to diving head-first into starting his own shop and becoming a full-service branding agency. He is now the Owner & Design Director of Egghead Creative.

Family is at the heart of everything he does and has helped him become the man he is today. Always by his side are his three amazing children.

He’s kind of a nerd…and his head is also kind of shaped like an egg.